June Meeting Scheduled for May 5th

Hi-Lites will be having their monthly meeting on June 5th at Grotto Pizza starting at 7:00pm. New members are always welcome. On the agenda is the Cruise scheduled for June 22nd at The Big B Restaurant and I/C on Rt. 11 just north of Berwick.
Posted by hlmc at 8:11 PM No comments: Links to this post 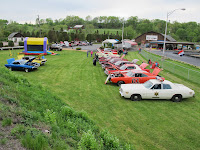 Posted by Earl at 9:00 PM No comments: Links to this post

We hope you can join us a the Starting Line of out 2013 Cruise season Saturday May 18th from 4pm-7pm at the Pikes Creek Raceway Park on Rt 118 in Lehman.

This cruise always packs a crowd and is great fun for everyone. Part of the success of the Pikes Creek Raceway Cruises is that there is so much to do besides just looking at some really cool cars. Another reason this cruise will be so amazing is that club members and friends have been working hard on their winter projects and can now show them off to everyone.  While at the cruise guests can ride go carts, play mini golf and kids can enjoy the playground equipment and listen to some great music DJ'd by the one and only Jack Judge.

This season we will be awarding 4 trophies at each event. We added a trophy to the normal three this year in honor of are dearly departed member Dave Nuss. Dave was the club secretary for years and you may remember him as our Public Address Announcer at many of our past events. This year each show will have a Crew Chief and Pit crew. The Pit Crew will be responsible for picking the three random winners and the Crew Chief will be responsible for picking the winner of the Dave Nuss Memorial Trophy.

We invite you to join us for few hours of great family fun and a chance to enjoy our hobby with us. We look forward to seeing you their

Hi Lites Motor Club had it monthly meeting on May 1st at Luzerne County Community College. Before the meeting they were shown the new site that is being developed for them by Melissa Lohman an LCCC student. Her new site should go live by the end of May.

At the meeting the yearly flyers were handed out and two memberships were accepted. It was reported the trophies were completed and that someone would need to pick them up. This year. there will be four trophies at every event. The fourth was added this year in memory of our loved and trusted secretary David Nuss who passed away this past December. We will miss him

There was a Spring Car Cruise discussed and that will take place is interest is sufficient. The cruise will take place Saturday May 11th and will be a short trip to Berwick with a stop at the Big B. Restaurant. Any one interested in participating should contact Jack Judge immediately so arrangements can be finalized. If the interest isn't adequate, the cruise will be cancelled. Jack can be reached at 477-2477.
Posted by Earl at 9:41 PM No comments: Links to this post